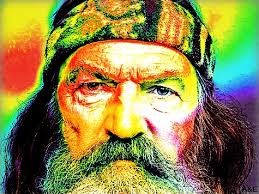 My news feed exploded yesterday with high emotion concerning Phil Robertson from Duck Dynasty. His comments about gay people really angered his employer A&E who seem to be huge supporters of the gay community. That didn’t surprise me. What surprised me, or saddened me, was the huge emotion this evoked from Christians. So many were livid about their freedom and rights to believe that homosexuality is wrong being trampled on.

I have been back in the US for a month now and I have only seen the same emotions on a mass scale in churches applied to one other thing: Obama Care. Leaders and others are very upset about this unconstitutional bill. I hear about it in church everywhere we go on furlough.

So maybe I am in danger of appearing un-American. I realize that. But let me say that I have been living with and serving along side brothers and sisters in a Muslim country for 7 years. They have a Muslim dictator as their king. They have no freedom as Christians guaranteed to them by their constitution. They don’t have the freedom to evangelize or to congregate. Their taxes are high and their income is low. Their health care is completely socialized and very poor…but we never talk about any of that.

What impresses me is that they are mostly concerned with reaching their friends, family, and country with the Gospel. They are excited about their little church that meets in secret in homes. Don’t get me wrong. They aren’t perfect. There is a lot of misplaced passions there, too. But they are under no delusion that their constitution or their government is failing in its role of Savior.

Phil Robertson may be fired by a secular, private company and will need to return to his Christian mansion outside of the public lime-light. Others around the world are still dying without Christ or, in some cases, are dying because of Christ. Maybe you didn’t know about it. I didn’t see many American Christians post anything on Facebook  about it.

So here are a few other Christian brothers and sisters who deserve our emotion maybe more:

-There is a refugee crisis in the Gwoza region of Nigeria. Muslim militants have burned 55 churches and their homes. Many of these thousands would be born again Christians.

-Many born again Christians in the village of Sadad, Syria have been tortured and murdered for Christ by the US backed rebels. They are still under siege.

-There are many Christians in prison in various places all over the world. Including the American Pastor Said Abedini.

-There are maybe 2 billion people who haven’t heard the Gospel at all, yet.

My point is that we are distracted from the Great Commission by lesser things. We have misplaced our love for God with our love for country. We have made idols of our freedom. Maybe we believe in the US constitution and hold fairly loosely to the Bible. My husband says often that nationalism is the enemy of the Great Commission. I wonder if our love for Christ could grow if it wouldn’t push out lesser affections. The difference between a wasted life and an eternally useful life is the object of our affections.

I want to say in closing that I feel compassion to my fellow American believers. Possibly our comforts and security have blinded us. Our blessings of freedom and material possessions may sometimes hold us back. I do find my eyes still tearing up when I hear the national anthem and I love to read about our great history as a nation. I sometimes sit and just contemplate what if I hadn’t been born an American. Would I have ever heard of Christ? So please understand though my words may seem harsh I truly write this with love. I realize not all have had the privilege to see these former Muslim believers serving the True King under the reign of a Muslim Monarch. They are  great examples to me and have really helped me put things in perspective.

I understand that side of these issues mentioned. I am not trying to say we should not say anything because Christians in other countries have it worse than we do. I just would love to see excitement for reaching others with the Gospel to be like what we have seen over these issues. I have seen people almost obsessed with these issues. Extremely fearful about our freedoms being taken away. The defeated attitude of so many believers is very sad and very contagious. My intention for this post was to encourage us that WE WIN! No matter the road we go down, no matter how hard. When I hear things like this issue with Phil Robertson, is does upset me like it does most believers. I just wanted to draw attention to the fact that no matter our situation we can live victoriously though Christ! I just would love to encourage other believers to see a bigger picture. Pray for the world, sure stand up for our rights here in the States of course, but be encouraged that persecution will only draw us closer our Savior and that is something we all want! So either way there is victory!