The following post was written by Bethany Staley, one of the Our Generation Training Center Students, while completing her six-month missions internship in South Africa under the supervision of missionaries Mark and Amy Coffey. This post originally appearing at her blog: XperiencingXhosa.

I was at a convenience store today and while I was waiting in line, something caught my eye. It was stuck right in between the assorted snacks, candies, and holiday decorations out for Christmas. I was shocked when I read it and realized that it was funeral insurance, which people could pay for to ensure that in case of death, their funeral expenses would be covered. There was an option for 18,000, 13,000, or 9,000 Rand that covered a family with up to five children.

What surprised me the most was the absolute normalcy of the fact that you would buy funeral insurance at the same time you would buy a Christmas ornament or gift bag.  In America, this would be right where people would buy ITunes or Applebee’s gift cards. In South Africa, people are buying funeral coverage instead. 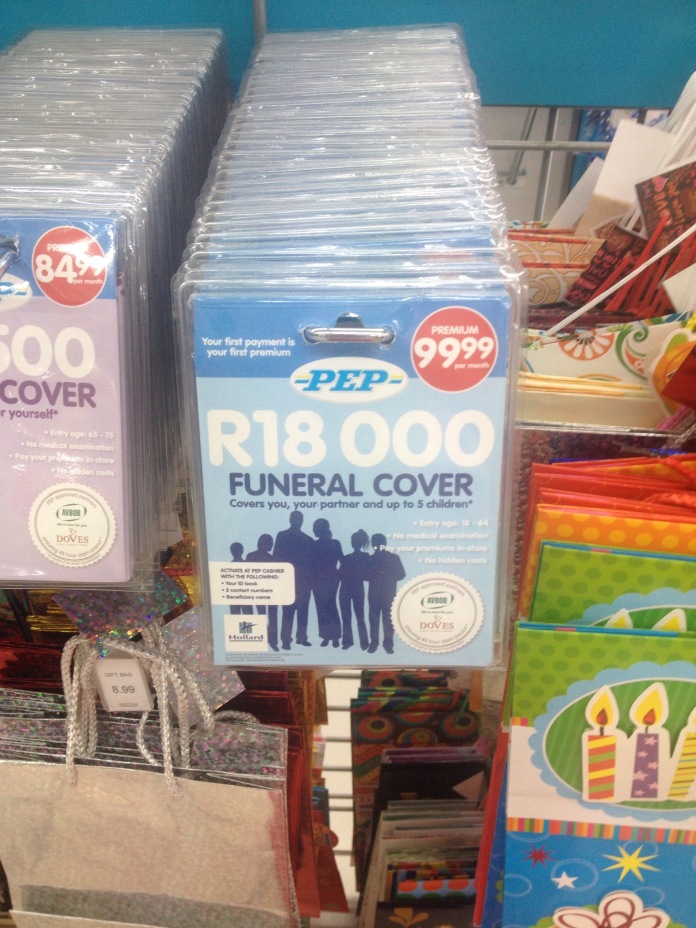 Death is pretty common here in South Africa. For the Xhosa people in particular, attending funerals on a Saturday is as normal to them as it is for Americans to watch college football. The life expectancy here is around 47, which hits home, because had my parents been born here, they may have already been dead.

It’s a sobering thing to think about, when you realize that the vast majority of the people buying this funeral coverage are on their way to hell. Death is sobering, but what is more sobering is where these people are headed after their death. Yes, the cost of the funeral will be paid for, but no convenience store purchase can cover the cost of their sin before an Almighty God.

As Christians, we have the assurance that there is life with Jesus Christ after death. The Xhosa people of South Africa do not. They trust in their ancestors to intercede with God on their behalf. They do good things and attend church to gain favor with God. However, no ancestor, good deed, or church service will pay the price for their salvation.

I’d encourage all who read this to really think about what you can do to reach the world with the gospel message, which a lot of us have known our entire life. There are billions of people who have never heard a clear presentation of the gospel, who do not know who Jesus is, or why He had to die on the cross. Whether it be giving sacrificially to missions, being a missionary, telling your co-workers or neighbors about Jesus, taking a missions trip to South Africa 🙂 or praying for the world and the missionaries around the world, we should all have a part in world evangelism.

There is nothing wrong with buying funeral coverage, and making sure that your relatives do not have to struggle financially at the time of your death. What is wrong, as Christians, is to stand by idly while people die and go to hell around the world. Let’s do something about that, and get involved in reaching the world with the gospel truth.

One thought on “Friday Spotlight: A Sobering Sight by Bethany Staley”